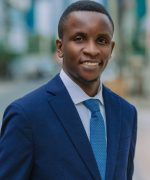 Emmanuel is a Tanzanian qualified lawyer (Advocate) and a registered Arbitrator with Tanzania Institute of Arbitrators. He regularly advises international and national companies with business interests in East Africa on diverse issues relating to tax, corporate transactions, dispute resolution and regulatory matters (including local content advisory in the natural resources sectors).

He was until recently Legal Counsel for Equinor Tanzania (seconded from an International law firm), their in-house lawyer advising on the US$ 30 Billion Tanzania LNG project. He was also legal counsel responsible for advising the company on matters pertaining to compliance with the Petroleum (Local Content) Regulations, 2017.

Prior to Equinor, Emmanuel worked at a leading international law firm and was part of the cross-border Africa team advising on a broad range of transactional and regulatory matters across the energy, mining, infrastructure, telecommunications and agricultural sectors. Since then He regularly works with major national, regional and international corporations, international banks and DFIs providing advice on corporate, M&A and project finance matters.

Emmanuel is admitted to the Bar as an Advocate of the High Court of Tanzania and holds a Bachelor of Laws (LL.B) (with Honours).

Emmanuel is fluent in English, Kiswahili and a learner in French.

Some of Emmanuel’s representative experience:

∗ Experience gained prior to start of EGB LAW

Our website uses cookies to distinguish you from other users of our website. This helps us to provide you with a good experience when you browse our website and also allows us to improve our site.

Any cookies that may not be particularly necessary for the website to function and is used specifically to collect user personal data via analytics, ads, other embedded contents are termed as non-necessary cookies. It is mandatory to procure user consent prior to running these cookies on your website.